Piano Keys and Parkinson’s: A Story of Determination against Disease
Octogenarian’s music “healed those who were sick in body, mind and spirit.”

Like great pieces of music, some people’s stories are simply timeless. Lucien Leinfelder was a man whose dedication continues to inspire us. He passed away in April 2018 from leukemia, but his legend lives on. Lucien brought great music to life, even as he himself battled Parkinson’s disease, bringing joy and respite to patients, guests, and staff at Texas Health Presbyterian Hospital Dallas. We are grateful to have played a part in his care, and are appreciative for his gifts of music and spirit. To learn more about this extraordinary gentleman, visit his Facebook page.

Lucien Leinfelder: The Gift of Music

A tremor, slowed movement, rigid muscles, impaired posture or balance — all are characteristic signs of Parkinson’s disease. But all of those telltale symptoms simply melted away once classically-trained concert pianist Lucien Leinfelder’s fingers hit the piano keys.

Doctors diagnosed Leinfelder with Parkinson’s disease at age 60 and told him that he would never be able to play again. But the pianist with “the hands of an angel” did not let Parkinson’s keep him from playing the instrument he learned at age three. 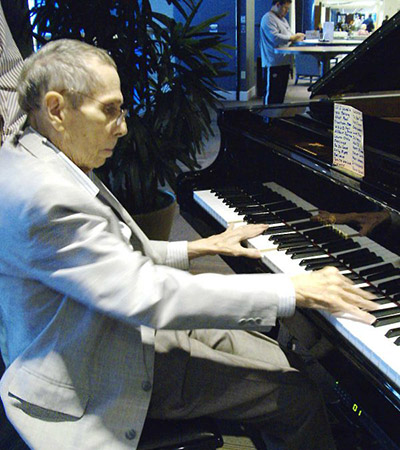 Leinfelder studied at the Juilliard School of Music in New York. His long and storied career included playing concerts across the globe, appearing alongside famous musicians and Hollywood starlets, and performing as a soloist with the Dallas Symphony. But later in life, he enjoyed performing for a different crowd: the physicians, nurses, staff, patients, and visitors at Texas Health Presbyterian Hospital Dallas, where he also received treatment.

“Dr. Anna Tseng, Lucien’s neurologist, knew that Lucien practiced every day for hours,” said Kathryn MacDonell, neuroscience program manager at Texas Health Dallas. “She asked him what he wanted to do with his music, and his response was to play for people.”

Knowing that sharing his talents with an audience would positively impact his well-being, Tseng reached out to MacDonell to find an opportunity for Lucien to play at Texas Health Dallas.

“Hours of practicing and performing built his muscle memory,” explained Anna Tseng, M.D. “His fingers almost took on a life of their own, where they remembered the notes he played so well throughout his life. It’s almost as if they came out and took off by themselves.”

Leinfelder performed weekly at Texas Health Dallas and gained a following of fans who loved his talent as much as his courage.

“Lucien’s talent was incomparable,” said Sonya Manibusan, manager of volunteer services at Texas Health Dallas. “His music healed those who were sick in body, mind and spirit … patients and guests alike.”

Leinfelder broadened his audience and potential fan base with the release of a documentary detailing his incredible journey. The video, “Lucien Leinfelder: The Pianist Who Played Through Parkinson’s,” details his determination to overcome personal and professional obstacles, and conveys the challenge of playing the piano while battling Parkinson’s. In this documentary, many find inspiration.

“It is a moving tribute to an incredibly talented man and musician,” MacDonell said. “Lucien’s journey will make your heart swell with admiration for his strong determination to give the world beautiful music.”

“Undeniably, Lucien was an inspiration for all of us! Despite his chronic condition, he continued to live his dream of giving the

world beautiful music,” MacDonell said. “We are richer for having enjoyed his presence at Texas Health Dallas, and we are inspired by his commitment to brighten the days of patients and staff.”

Find a neurology specialist on the medical staff of a Texas Health hospital near you. Call 214-705-3402 today.