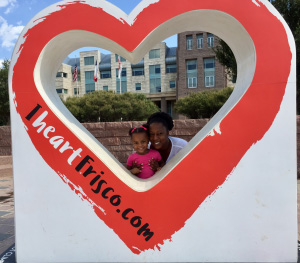 Harper Nicholson is a sassy three year old, not unlike many children her age. What makes her unique is that unlike the majority of youngsters Harper came into this world so much smaller than most, weighing a mere 1 pound-5 ounces.

Born at just 24.3 weeks, Harper was a fighter from the beginning but she had many mountains to climb early on — as did her mom and dad. Parents Candice and Tommy Nicholson weren’t expecting to face challenges with the birth of their first child. In fact, Candice’s pregnancy had been pretty uneventful up until two days prior to her delivery.

That’s when the 34-year-old started experiencing what she described as the worst pain she has ever felt. She attributed the excruciating throbbing in her upper abdomen to heartburn and vowed to power through the pain until her scheduled appointment with her obstetrician the next morning. Candice would soon find out what she had was a condition known as HELLP, a life-threatening pregnancy complication that affects the liver and is thought to be a severe form of preeclampsia. Baby Harper was delivered later that afternoon at Texas Health Presbyterian Hospital Plano.

Candice never got the chance to attend the prenatal classes she had signed up for at the hospital where she planned to deliver. Knowing there would be a need for a high level of interventional care once Harper arrived, Candice’s obstetrician recommended she deliver at Texas Health Plano where the family would have access to a Level IIIB Neonatal Intensive Care Unit.

Being a micro-preemie, Harper did experience a myriad of issues during what would become a four-month stay in the hospital’s NICU. She had breathing problems and patent ductus arteriosus (PDA), which affected the flow of blood from her heart. She required surgery for a double inguinal hernia and early on was plagued with what physicians in the NICU described as episodes of “seizure-like” activity. She also was diagnosed with retinopathy of prematurity (ROP), a disease that affects the retina of the eye. Fortunately, Harper had available to her a host of specialists on the hospital’s medical staff to help her overcome her health challenges, including a pediatric neurologist, ophthalmologist and neonatologist. One by one she conquered each difficulty.

At the same time, Candice and Tommy had struggles to overcome as well.

“Having the smallest baby in the NICU for quite some time was really hard because I felt like I didn’t have anything I could compare her to,” said Candice. “There wasn’t really any other family we could relate to in terms of how small Harper was and how early she came. There were so many unknowns in the beginning, but the doctors and nurses answered our many questions and taught us EVERYTHING.”

Candice admitted she and her husband relied on the NICU nurses to show them how to bathe, feed and even hold Harper properly. And when the long hospital stay started to take its toll on the couple’s work life, friendships and hobbies, the nurses and staff were there to offer a little therapeutic support.

“Our nurses were so amazing and I could tell they really felt like it was their job to make sure they would be sending Harper home with parents who were prepared to take care of her. They grew to care for our little one so much that they were truly invested in making sure we wouldn’t mess up their hard work. We actually had a care team with four core nurses that the nurse manager let us choose. This made me feel more secure, knowing that Harper was generally with people who knew her history really well and who felt a special connection with her. And it wasn’t just them. There were so many other nurses who we got to know, and they all brought something special to the table. I have kept in contact with a few on Facebook and I am staying connected via the NICU Parents group,” added Candice.