“It’s changed the whole concept of how and when we can diagnose lung cancer,” said John Burk, M.D., a pulmonologist on the medical staff at Texas Health Fort Worth. “If you can diagnose earlier, you can treat earlier. We think that will improve five-year survival rates and potentially save lives.” 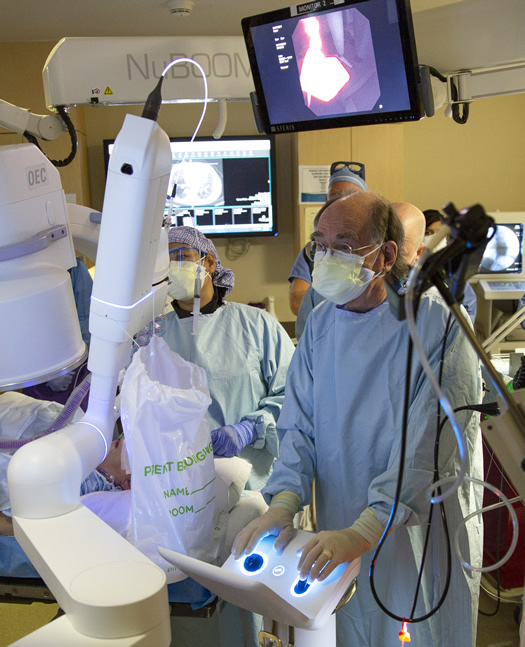 The robotic system, Ion, is designed to access difficult to reach areas of the lung. Guided by the physician, the robot uses a pre-planned navigation path to help guide an ultra-thin catheter to a lesion, which is a round or oval shaped growth in the lung that appears on a CT scan.

Typically, a primary care physician will recommend a CT scan for a patient with a history of smoking or other pulmonary issues. It may reveal a spot on the lung, often the size of a nickel or dime. These spots are also seen in patients who are given chest scans for other reasons, such as scans to check for bleeding after an accident or another pulmonary issue.

Most patients who have spots on the lungs have no symptoms, Burk said. The patient then has three options — wait to see if the spot gets bigger, have it removed, if possible, or undergo a needle biopsy or bronchoscopy, a procedure that allows a doctor to examine the inside of the lungs while taking a sample to determine if it’s cancerous, then possibly remove it if it is.

“This new tool will help us have a low complication rate and a very high success rate in diagnosis for small lesions,” Burk said. “The key is that we’re able to biopsy the growth and immediately see if it’s cancerous, then remove it if it is.”

Kirsten Drake, D.N.P., R.N., OCN, NEA-BC, is the director of the Texas Health Fort Worth thoracic lung program and calls it a life-altering experience for patients.

“Many times, patients had to worry and wait to see if a nodule grows to a size that can be biopsied. Now they don’t have to,” said Drake, the director of nursing for medical surgical renal oncology at Texas Health Fort Worth.

Lung cancer is the second most common cancer in both men and women, behind prostate cancer and breast cancer, respectively. The five-year survival rate for people with all stages of lung cancer is 19 percent, according to the American Society of Clinical Oncology (ASCO). More than half of people with lung cancer die within one year of being diagnosed, according to the American Lung Association.

“Lung cancer can go undiagnosed for years if there are no symptoms and the disease has not spread,” said Rohan Gupta, D.O., an oncologist on the medical staff at Texas Health Fort Worth.

During the procedure, the robotic catheter is passed through the endotracheal tube into the lung of the patient who’s under general anesthesia. A camera inside the catheter allows the clinical team to view inside the lung from a computer monitor. Once the nodule to be biopsied is reached, the physician uses the catheter to obtain the biopsy that will be given to a pathologist. The entire outpatient procedure lasts about two hours.

“We are able to see things we’ve never seen before and get to the corners of the lungs that were previously inaccessible,” Gupta said.

The care team is given a preliminary pathology report at the time of the procedure with the full report given to the patient in three days or less.

“We can offer diagnosis and treatment, almost in a single step,” Burk said. “Physicians can talk to the patient before they go home and tell them what was found. We’ll be able to discuss what comes next even before they leave the hospital.”

Burk recently used the new robotic lung biopsy on two patients. The hope is that the new technology will make a difference in the treatment of the disease in Tarrant County, which has seen an increase in cases of lung cancer, he said.

"We've made a significant investment in this technology for the health and wellbeing of our community,” said Joseph DeLeon, president of Texas Health Fort Worth. “Whether it’s cancer or not, we can give patients the comfort of knowing earlier with advanced technology.”