DALLAS — After three days of repeated power outages at his aunt's Dallas home during February's arctic storm, Steven Brown noticed something was very wrong with his legs. 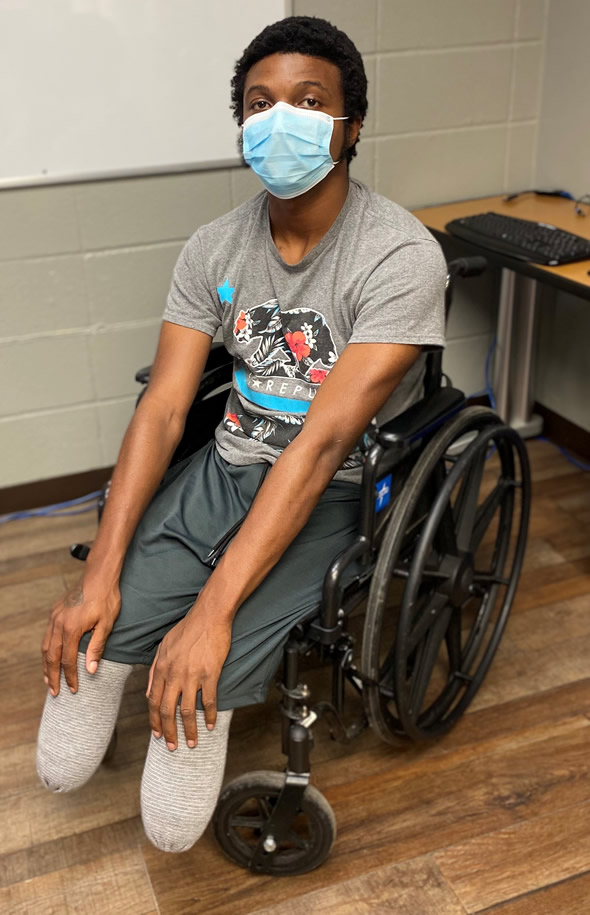 "My feet had swelled up on me," the 23-year-old man recalled. "I couldn't walk normal. My ankles locked up to the point where I couldn't bend my knees or stand up no more."

A relative took Brown to Parkland Memorial Hospital, where he learned he had suffered frostbite to his legs and had a blood infection. After three days of hospitalization, he was presented with two choices — either a long, complicated recovery filled with many uncertainties or amputation.

"Either I had an option that I could keep [my legs] and deal with whatever comes with it or the second option was I had to get both of my limbs amputated so I chose that one," Brown said. "Other people would probably be like, dang, I lost my legs. They'd probably have a hard time coping and dealing with it. … But I can deal with it. It's just a different way of living."

Unable to return to his aunt's home because of the living conditions and with no place else to go, Brown was referred and admitted into Health to Home, a collaborative medical respite program involving Texas Health Presbyterian Hospital Dallas; Austin Street Center, a Dallas homeless shelter; and CitySquare, a nonprofit housing and social support provider.

Funded entirely through donations to the Texas Health Resources Foundation, the 24-month pilot program provides qualifying homeless or imminently homeless men like Brown short-term residential care to recover in a safe environment. Clients of the program have access to medical care and other social support services, including substance abuse treatment resources and help finding them permanent housing.

The program is part of Texas Health Resources' commitment to improving community health. Currently, the program accepts clients from Texas Health Dallas and Parkland Hospital with plans to expand further in the future.

"We want to expand to outlying communities, other hospital settings, because there is such a need," said Jennifer Hay, M.S.N., R.N., director of the respite program and Texas Health Dallas Emergency Department.

"A lot of these gentlemen have chronic medical conditions — diabetes, high blood pressure and things of that nature that they have to take medications for the rest of their life. We've even had patients who have cancer in our respite program," Hay said. "This is something you cannot manage on the streets and this could end someone's life without care. We provide that extra support so that they can basically better manage their healthcare and live a healthier lifestyle."

Another case manager works to get clients back home or, when that is not possible, helps them apply for housing through CitySquare.

Since accepting their first client in October, the program has helped 24 men.

Brown faced being sent to other homeless shelters in Dallas once he was discharged from the hospital in March.

"Luckily, this was an option," he said. "This was the best option that was available."

The youngest client who has gone through the program, Brown turned 24 while staying at the shelter. He maintained an upbeat outlook about his future that staff say was contagious.

"He's very positive. Despite all of the downfalls that he's experienced, he still has a smile on his face," Carroll said. "It's great to have that positivity kind of transfer to our other clients. He brings that positivity every day."

As a client of the program, Brown was provided with his prescription medications, a wheelchair, a walker, clothing, meals and laundry. He also obtained health and prescription medication insurance, a primary care provider, and a copy of his birth certificate, and received job assistance and resources to complete his general educational development (GED) test.

The program also covered Brown's transportation to an amputation support group and appointments, including a recent appointment at the Hanger Clinic in Dallas, where Brown was fitted with prosthetic legs, thanks to the help of another nonprofit organization, Limbs for Life.

There, Brown learned the various steps in putting on and removing his prosthetic legs. With the support of parallel bars, he also took his first steps on his new legs.

Brown is confident it's just a matter of time before he can walk unassisted on his new legs and has set a goal to eventually drive again.

He recently moved into housing through CitySquare and feels grateful that Health to Home set him up with the resources and support he needs to be able to make it on his own.

Without it, he said, "I wouldn't be at the point where I am today."

Texas Health Resources is a faith-based, nonprofit health system that cares for more patients in North Texas than any other provider. With a service area that consists of 16 counties and more than 7 million people, the system is committed to providing quality, coordinated care through its Texas Health Physicians Group and 28 hospital locations under the banners of Texas Health Presbyterian, Texas Health Arlington Memorial, Texas Health Harris Methodist and Texas Health Huguley. Texas Health access points and services, ranging from acute care hospitals and trauma centers to outpatient facilities and home health and preventive services, provide the full continuum of care for all stages of life. The system has more than 4,000 licensed hospital beds, 6,200 physicians with active staff privileges and more than 23,000 employees. For more information about Texas Health, call 1-877-THR-WELL, or visit www.TexasHealth.org.