FORT WORTH, Texas – Brushing his teeth before heading to work, Terence Eans had no idea his life would change in a matter of minutes – he just knew he was lightheaded and didn’t feel normal. After receiving specialized stroke treatment at Texas Health Harris Methodist Hospital Fort Worth, Eans is grateful for the ability to share his survival story. 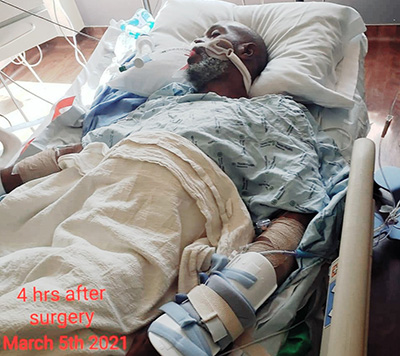 Terence Eans at Texas Health Fort Worth, several hours after his thrombectomy procedure.

On March 5, Eans, a 47-year-old construction worker, suffered a basilar artery ischemic stroke. This happens when a clot in the artery blocks the flow of blood to the brain stem. It can cause paralysis, difficulty breathing, swallowing, coma and even death.

“Not only did I make it, but I can walk and talk,” Eans said. “My experience at Texas Health Fort Worth was amazing, because my prayers were answered a thousand times.”

Had it not been for the quick actions of Eans’ wife Vanessa, it could have been a different outcome, said Matthew Fiesta, M.D., an interventional neuroradiologist on the Texas Health Fort Worth medical staff.

“The common saying is ‘time is brain,’ during a stroke,” he said. “She relied on her instincts. She didn’t realize it at the time, but she appropriately recognized the FAST signs — face droop, arm weakness, speech difficulty and time — and called 911 immediately.”

Paramedics first rushed Eans to Texas Health Arlington Memorial Hospital. The hospital’s stroke response team, which includes an ED physician and neurologist, both on the medical staff of the hospital, an ED nurse and a stroke coordinator, determined Eans needed an emergency procedure only available at a comprehensive stroke facility. Texas Health Fort Worth is one of less than 40 comprehensive stroke facilities in the state of Texas. It’s also the only advanced comprehensive stroke center in Tarrant County certified by The Joint Commission. In fact, Texas Health Fort Worth cares for the highest number of stroke patients* in North Texas. The designation encompasses the full spectrum of stroke care — diagnosis, treatment, rehabilitation and education.

“It allowed me to facilitate logistics at Texas Health Fort Worth for Mr. Eans’ arrival, and I was able to immediately plan the clot removal before I even arrived on the hospital campus,” Fiesta said.

To perform the thrombectomy to save Eans’ life, Fiesta made a small incision in Eans’ upper leg, threaded a small catheter and suction device through an artery, and then removed the blood clot.

“The clot was at the top of the brainstem vessel, and it was roughly the size of a small raisin,” Fiesta said. “Mr. Eans could have lost consciousness or suffered from paralysis. Worst case scenario, he could have died. Thanks to the immediate treatment received at both hospitals, he had a good outcome and he’s on the right management path to preventing another stroke.”

Two months after his stroke, Eans remains optimistic, yet reflective.

“We sometimes ignore our health and overlook the pain, especially men,” Eans said. “I know now that stroke is no joke. And because of all the nurses and doctors helping me survive, I can’t thank them enough for restoring my dignity.”