FORT WORTH, Texas — Texas Health Harris Methodist Hospital Fort Worth will open the Jane and John Justin Tower on April 2, 2022. 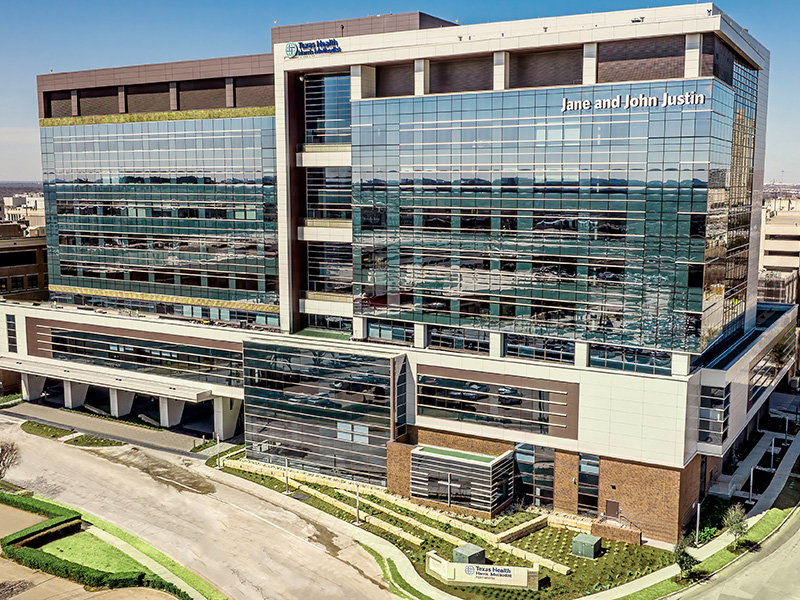 The opening caps a more than two-year-long, $300 million construction project that adds 400,000 square feet to the hospital. The nine-story tower, which includes 144 beds, 15 surgery suites, and new pre- and postoperative suites services, is the largest construction project in Texas Health history.

“The Jane and John Justin Tower reinforces Texas Health’s long-standing commitment to the Fort Worth community,” said Barclay Berdan, FACHE, CEO of Texas Health Resources and a former president of Texas Health Fort Worth. “What began nearly a century ago as a small community hospital to serve the citizens of a young, growing city has evolved into a world-class medical center serving the 12th largest city in the U.S.”

The Justin Tower will increase surgical capacity by almost 30%, with dedicated neurosurgery and orthopedics operating suites. The advanced surgical suites are twice the size of existing operating rooms (ORs) to accommodate modern robotic and imaging technology and are sized to accommodate even larger equipment in the future. They feature stainless steel walls to aid in environmental sterility. The additional surgical capacity will reduce patient wait times.

“Fort Worth and Tarrant County, along with the rest of North Texas, remain one of the fastest-growing areas of our country,” said Joseph DeLeon, president of Texas Health Fort Worth. “Our service area includes 1.2 million people in four counties, and that’s expected to grow by another 100,000 over the next five years. The larger, more modern facilities allow us to treat this growing population with specialty services, including trauma, neuroscience, heart and vascular, and many others.”

In addition to the ORs, additional elements of The Justin Tower were built with an eye to the future. All 144 patient rooms are private and can be modified to provide varying levels of care, from general medical-surgical to critical care. Additionally, the eighth floor of the tower features 36 patient rooms that can be made into isolation rooms. Additional design elements include the use of natural light, patient-friendly wayfinding, indoor and outdoor spaces for visitors, artwork and a soothing, home-like environment.

“From the surgical suites to the patient floor design and layout, every detail of Justin Tower is tailored toward creating an environment that fosters healing for our patients,” Berdan said. “Our goal is to make a hospital stay as comfortable as being at home, so the patient can focus on healing and returning to good health.”

The Justin Tower expansion has also provided additional space to help expand Graduate Medical Education (GME) programs, or residency programs, at Texas Health Fort Worth. The General Surgery Residency, which had its first resident class in 2021, will expand its service to The Justin Tower upon opening. In 2023, the Internal Medicine GME Program will host its first residents there. GME will have a direct impact on the physician shortage in Fort Worth.

“The tower is named in honor of the Jane & John Justin Foundation’s lead gift for the project, which reflects the Justin family’s long legacy of giving back to Fort Worth,” said Lynn Montgomery, a local business leader, Texas Health Board member, chair of the Texas Health Finance Committee and chair of the Justin Tower Campaign Steering Committee. “Because of the generosity of nearly 300 donors, Justin Tower will positively impact our community for years to come.”