Shiloh Morris and her husband, Kevin, were married when she was just 19 and he was 20. They always knew they wanted children, but there were some health issues that stood in the way. 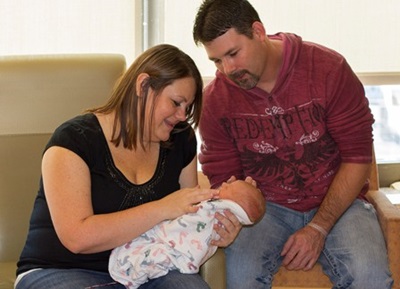 Shiloh has a bicornuate uterus. Instead of the normal pear-shape, her uterus looks more like a heart-with a deep indentation at the top-making conception, labor and delivery problematic and often leading to miscarriage. She was also diagnosed with Polycystic Ovary Syndrome, or PCOS, one of the most common causes of female infertility in the United States.

After seeing a number of fertility specialists, undergoing four unsuccessful tries at intrauterine insemination and experiencing two miscarriages, the couple decided to adopt. Shiloh and Kevin welcomed baby Nevaeh (heaven spelled backwards) into their lives from foster care three years ago. The Morris family was finally a happy family of three.

When Shiloh and her husband adopted, she was under the care of then obstetrician and gynecologist Julia Liaci, M.D., at Texas Health Presbyterian Hospital Dallas. Due to Shiloh’s medical history, the doctor advised her to have an ablation procedure done to thin the lining of her uterus. Now that she had her family in hand, she didn’t hesitate to have the procedure.

Shiloh’s health issues remained in check until she started having severe pain in her abdomen early in 2013. A CT scan ordered by Liaci turned up a lump in her uterus. Wanting to rule out cancer, a hysterectomy was scheduled to be performed in the Women’s Specialty Surgery Center but Shiloh never made it to the operating room. Instead, a pregnancy test (required before any procedure of this kind) turned up something quite amazing.

What was thought to be a mass on her uterus turned out to be a fluid-filled sac containing a 10-week-old fetus. Shiloh was pregnant.

To confirm the presence of a heart beat, Shiloh’s doctor referred her to Brian Rinehart, M.D., the director of the Maternal High Risk Program at Texas Health Resources Presbyterian Hospital of Dallas.

“We’re always happy when a couple is able to conceive,” said Rinehart. “It’s especially thrilling when a couple that has tried for so long and so hard to have a child becomes pregnant.” Rinehart was able to confirm the pregnancy and address Shiloh’s health concerns and special gynecological needs.

In her ninth month of pregnancy, Shiloh Morris awoke with a sharp headache. In the OB/GYN’s office, her doctor noticed that her blood pressure had spiked and put her on strict bed rest at home. When the preeclampsia didn’t subside, Shiloh was checked into the High-Risk Obstetric unit in the Margot Perot Center for Women and Infants at Texas Health Dallas. 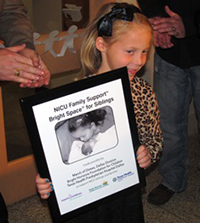 Nevaeh Morris, baby Noah’s older sister, cut the ribbon at Texas Health Dallas’ new Bright Space located in the Special Care Nursery. Bright Spaces, the signature program of the Bright Horizons Foundation for Children, creates warm, enriching playrooms in organizations that give children and families a special place to gather together and have fun.

With her preeclampsia mounting, a C-section was performed at 33 weeks of pregnancy and Shiloh and her husband welcomed baby Noah into the world. Weighing in at five pounds and three ounces, Noah was healthy. He spent just three days in the Level III Neonatal Intensive Care Unit, where he received 24-hour comprehensive care, before being transferred to the Special Care Nursery.

In the first few days of Noah’s life, Shiloh was unable to spend much time with her newborn. After delivery, she began to bleed internally due to complications from having a bicornuate uterus. Medications stopped the bleeding but not before Shiloh required two blood transfusions. Saddened by not being able to bond with her baby boy, Shiloh’s medical team sought to cheer her up and also help educate her on how to take care of her new preemie.

“The Special Care Nursery staff was amazing,” Shiloh recalled. “They brought Noah to my room so I could hold him, learn his cues, feed him and just get to know him a little bit before I went off for the transfusions.”

“To have Shiloh achieve the gestational age that she did and to be able to have gone home with a healthy child is an outstanding conclusion to this pregnancy,” said Rinehart.

Physicians on the medical staff practice independently and are not employees or agents of the hospital or Texas Health Resources.