FORT WORTH, Texas — April Boudreau wasn’t sure she had it in her to face her fourth battle with cancer. 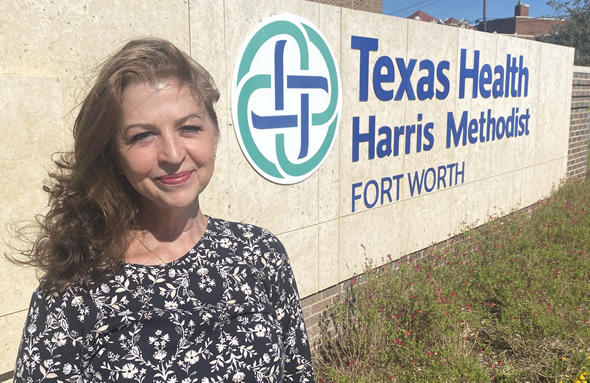 She had survived two bouts with Hodgkin’s lymphoma — in 1984 and 1985 — and later beat breast cancer in 2002. So, when her yearly CT scan, prompted by her cancer history and inherited genetic mutations, revealed a worrisome nodule on her right lung in January, doctors assumed it was cancer.

“I never thought I’d fight the fourth time,” admits the 61-year-old Burleson grandmother. “I’m like, ‘No, it’s too hard. I can’t do the chemo and radiation again. I’m expecting to die.’”

Using the latest in robotic technology, Boudreau’s doctors performed a bronchoscopy that confirmed she had lung cancer and then a minimally invasive surgery to remove it at Texas Health Harris Methodist Hospital Fort Worth — all while she was under a single anesthesia this past spring.

Boudreau said she awoke several hours later to find out that while she did, indeed, have lung cancer, preliminary reports, which were later confirmed, indicated she was now cancer-free.

“They removed it all,” Boudreau said.  “You pinch yourself because you can’t believe it’s true.  This was all so simple, with no radiation or chemo.”

John Hollingsworth, M.D., a pulmonary disease specialist, said this accelerated approach not only reduces the time between detection and surgical intervention — and thus the amount of anxiety experienced by patients — but is also associated with a very low rate of complications.

“Texas Health Fort Worth is committed to providing the most advanced care to our patients with lung cancer,” Hollingsworth said.

Texas Health Fort Worth was one of the first hospitals in the state to adopt the new robotic-assisted technology to biopsy potential lung cancer tumors earlier than traditional diagnostic tests allow. Guided by the physician, the robotic system uses an ultra-thin catheter to access lesions in difficult-to-reach areas of the lung.

Richard Vigness, M.D., a thoracic cardiac surgeon on the medical staff at Texas Health Fort Worth, said the robotic-assisted thoracic surgery allows the classic surgical approach for lung cancer to be done with very small incisions.

“The lung tissue containing the cancer is removed without the previously used large incision and the trauma of spreading the ribs associated with it,” Vigness said. “Often, patients can go home the following day after the operation.  This has been a major change in the patient experience that is delightful for all of us who have done this for a long time and especially for our patients.”

Boudreau said her surgery involved only five tiny incisions on her side and she was discharged from the hospital the next day.

“I took pain pills for three days, and that’s all I needed,” she said. “Within three days later, I was just normal, walking around. I couldn’t believe it. “

Lung cancer is the second most common cancer with about 236,000 new cases diagnosed each year and the lead cause of cancer deaths, according to the American Cancer Society. Joseph DeLeon, president of Texas Health Fort Worth, said the hospital is proud to invest in advanced technologies that help in the early detection and treatment of this deadly disease.

“Studies show that the number of deaths from lung cancer are continuing to drop due to people not smoking and advancements like these in which people are diagnosed and treated earlier,” DeLeon said. “Through these investments and by bringing multi-disciplinary treatment teams together, we’re saving lives.”

Today, Boudreau gets a CT scan every six months and remains cancer-free. She said she hopes others will pay attention to their body’s warning signs, see a doctor for concerns and take cancer screenings seriously and stay positive should they receive a cancer diagnosis.

“I was kind of a little bit out of breath, but I didn’t know (it was cancer). I just thought it was aging,” Boudreau said. “So, always listen to your body and catch it in time, so that you can be cured and can live life.”

Follow this link to learn more about Texas Health’s cancer services and find a cancer specialist.