Labor and Delivery nurse April Mayhan has been around more than just a few pregnant moms during her years in health care. She has a pretty good idea of what the journey to parenthood entails. But even as the mother of two children, April wasn’t quite sure what to expect when she became pregnant for a third time in 2016 with twins. She and her husband had planned to deliver at Texas Health Harris Methodist Hospital HEB, where she worked and where her obstetrician was located. The twins had a different plan.

April began suffering from hyperemesis, or severe morning sickness, at around 23 weeks. Still working, she tried to rest whenever possible, and obstetrician Manisha Parikh, M.D., of the Texas Health HEB medical staff ordered medication to treat the nausea and vomiting. During an all-day work meeting, April started feeling like something else wasn’t quite right.

“I just couldn’t get comfortable,” she remembered. “My stomach was tight off and on and since I had never been pregnant with twins, I was unsure if they were just moving a lot or if I was having contractions.”

April decided not to chance anything. She and husband Larry headed to the hospital that evening, where an ultrasound showed her cervix had become shortened and she was contracting every five minutes. In preparation for the possibility of a preterm delivery, April’s physician requested she be transferred to Texas Health Harris Methodist Hospital Fort Worth to be near a Level III Neonatal Intensive Care Unit. She was placed on strict bed rest in the hospital’s antepartum area in an effort to get her as far along in her pregnancy as possible.

While on bed rest, April read, worked crossword puzzles, visited with friends and family members, and tried to stay calm. She had help from her husband and the hospital’s nursing staff.

“My husband spent every night with me and we watched Netflix together,” April said. “All of the nurses were wonderful, but Lauren was truly exceptional because she made me scrapbook pages documenting each gestational week. Every day that goes by event-free you take a big sigh of relief, but every week that passes is an even bigger accomplishment. The fact that she took the time to do that for me meant so much.”

One night April told her husband to stay home because he was especially tired. It was raining and she dreamed that her water broke, and in fact it had. But she was still just 26.2 weeks into her pregnancy. Twelve hours later with her husband on hand, April gave birth to 1 pound-14 ounce Christopher and 2 pound-2 ounce Titus. So began the family’s 166-day NICU journey. 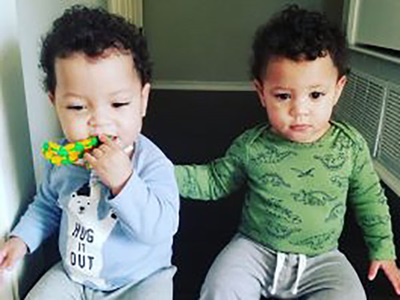 “The NICU nurses were fabulous through all of this,” April added. “They were there to hug us, talk to us and comfort us when the boys weren’t having a good day. They took pictures of the boys for us and made signs for each month change. Nurse Dina, who was assigned to both boys pretty regularly, realized that we hadn’t been able to have much physical contact with them and allowed us to help give Titus his first bath. This completely made my night. Every time she had them after that she was very mindful of waiting to do her cares until we got there so we could help.”

During their long stay at Texas Health Fort Worth, the Mayhans took advantage of special services designed for parents and families of NICU babies. This included NICU cameras and kangaroo care to bond with their young sons. When April returned to work, she gained a sense of relief in being able to see that her babies were being well cared for. Her father in Minnesota was even able to regularly check in on the boys via the webcams, making for one “happy grandpa.”

“Knowing that I had to go home each day without my babies was beyond hard, but holding them during kangaroo care made the rest of the world stop, if even just for an hour. I was able to start breastfeeding Titus during that time, and that was so special to me.”

Learn more about having your baby at Texas Health Fort Worth.