Athletic Concussions: Signs, Symptoms and Treatment | Texas Health
School-age kids from all over the North Texas area have headed back to class this fall, ushering in a frenzy of new schedules and tryouts for sports teams. Whether your student is the starting quarterback for the varsity football squad or playing peewee soccer for the first time, the topic of youth concussions should be on the radar of every athlete, parent and coach.

Texas Health Sports Medicine has two concussion centers across the Metroplex, with locations in Fort Worth and Plano to address the diagnosis, treatment and rehabilitation of athletes with concussions. 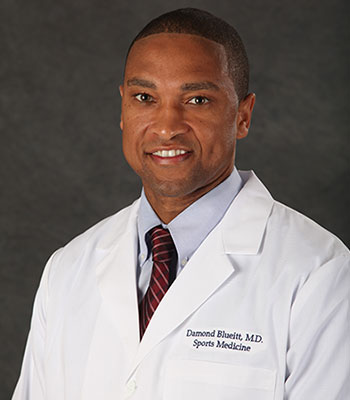 Damond Blueitt, M.D., an orthopedic sports medicine specialist on the medical staff at Texas Health Fort Worth and Orthopedic Specialty Associates, a Texas Health Physicians Group practice, said he knew concussions would be a part of his practice, but didn’t realize to what extent until he and his colleagues were inundated with athletes needing post-concussion care.

“The more we learn about concussions, the more we see them in clinic and have the opportunity to treat our patients properly,” he said. “We’ve started seeing rule changes, new laws put in place and increased education about the risks of concussions, which is great. People are starting to notice the signs and symptoms more so they come in quickly for treatment, whereas before, they might have just blown it off.”

According to the Centers for Disease Control, close to half a million children are treated in emergency rooms every year with traumatic brain injuries, which include concussions. Many of these are due to playground accidents and other falls, but approximately half are sports-related injuries.

The CDC lists the following danger signs for concussions and recommends treatment as soon as possible if an athlete shows one or more symptoms:

Athletes may be hesitant to report concussion symptoms for fear of losing a starting position or playing time, but continuing to play through a concussion can lead to a longer recovery and can make them more susceptible to another concussion.

“We do sometimes see athletes [minimizing] their symptoms because they want to continue to play, but the sooner they come see us, the sooner we can get them back on the field,” Blueitt said. “Time is especially important for younger athletes with concussions because their symptoms can be more severe and more prolonged. Their brains are still developing and processing everything at such a fast rate, so it makes sense that a concussion would have the potential to negatively affect functionality.”

Helmets play a big part in keeping kids safe from head injuries, but they can’t prevent every concussion and aren’t used in every sport. Helmets should be in good condition, used properly, fit correctly and be appropriately certified for use in the sport.

Blueitt said that while helmets can’t help prevent concussions, a big part of whether an athlete suffers a concussion is due to what his or her body can handle.

“One athlete may get a blow to the head and sustain a concussion, while another may get hit with three times the force, but not get a concussion,” he said. “Our bodies are all different, so our threshold for concussions will vary because our brains react differently.

“We can’t always prevent concussions, but kids can do things to make sure their bodies are in the best condition, like staying hydrated and keeping in good physical shape. Help your helmets do their jobs by making sure they fit right and wear them correctly.”

Blueitt points to increased awareness by parents, coaches and athletic trainers as the best way to prevent athletes from going untreated after suffering a concussion.

“Fortunately, coaches and athletic trainers in most Texas schools receive mandatory education on concussions, so we talk to all of these folks about symptoms, treatments and the idea that if there’s any doubt, they should have an athlete sit out,” Blueitt explains. “The people that are around these kids every day are our first line of defense because they know them better than we do, so they can spot when something’s not right. Maybe an athlete isn’t exhibiting common concussion behaviors, but they have balance issues, vision disturbances, emotional changes or they start failing classes because of cognitive impairment.

“Concussions can be very complicated but are usually corrected with rest and rehabilitation. What we want people to know is that if a concussion is suspected, the athlete should see a specialist who regularly deals with sports concussions as soon as possible. If we can see them soon, we can increase their recovery rate and get them back on the field as soon as it’s safe to do so.”