Committed Orthopedic Surgeon Brings New Hope to Sidelined Soccer Player
17-year-old Karsyn Kimbrough had been on the sidelines recovering from an ACL injury for a full year - the longest she'd gone without playing soccer since she was four years old.

An estimated 200,000 anterior cruciate ligament (ACL) injuries occur each year, making the ACL one of the most commonly injured ligaments in the knee, according to the American Academy of Orthopedic Surgeons (AAOS). The risk of ACL injury is even higher for athletes participating in high-risk contact sports such as football, soccer, basketball, and skiing.

Karsyn’s mother, Robin, admits that soccer can get pretty physical but Karsyn always seems to spring right back up if she's knocked down. So, when Karsyn didn’t get up after a late hit during a playoff game last year, she knew something was wrong.

When I went to pass (the ball) out to someone, they hit me late,” Karsyn says. “She knocked my knee out from underneath me. I just fell down and I kind of just balled up cause (my knee] just felt like jello.”

Karsyn has a passion for soccer and enjoys how challenging the game can be, but no one ever expected that her biggest challenge would be found on the road to recovery.

Karsyn underwent two ACL reconstruction surgeries, neither of which helped.

Months after surgery, Karsyn’s pain never went away and only got worse, to the point where it was interrupting her sleep. Desperate to ease Karsyn’s pain, the Kimbroughs started searching for a solution. They found it in Steve Singleton, M.D., orthopedic surgeon and sports medicine physician on the medical staff at Fort Worth Orthopedics, a Texas Health Physicians Group practice.

“After an MRI revealed significant scarring and inflammation in the joint, Singleton devised a two-pronged approach to help heal Karsyn’s ACL and to get her active and pain-free again. The first step in the process was to clean out remaining scar tissue, then after her knee had time to recover, he went back in, revising the original reconstruction surgery.

“He was doing things to prevent the things that happened in the first two surgeries,” Robin says. “He wanted to do as little trauma to her knee as he could possibly do. We knew then that we were on the right track.”

Karsyn’s recovery is light years ahead of where she had been less than a year ago.

Karsyn is excelling in her rehabilitation and hopes to play recreational or intramural soccer in college, and that’s something that Singleton takes great pride in.

“Karsyn has done great. She has really regained her full range of motion and her ACL is healing great,” he says. “To be a part of the process and helping her work toward her goal of getting back to just walking and then running and then soccer is incredibly satisfying for me.”

If you ask Karsyn and her mother if they would recommend Singleton and his practice, there is no hesitation. 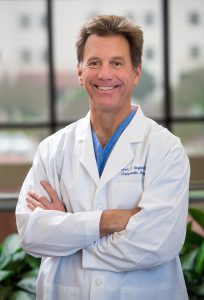 “The whole staff at Fort Worth Orthopedics just seem to care genuinely about each person,” Robin says.“I would definitely recommend Dr. Singleton,” Karsyn agrees. “He’s helped me so much; he’s so friendly.”

Learn more about Steve Singleton, M.D., his colleagues, and the specialized orthopedic and sports medicine care they provide, or listen to a recent podcast featuring Singleton talking about sports injuries and medicine.