Dentist Smiling After Treatment for Stroke
Out of nowhere, Dr. Bob Jing began slurring his words. Then, all feeling escaped the right side of his foot and he collapsed to the floor.

It was a normal Saturday at Dr. Bob Jing’s dental office, bustling with employees and patients. Out of nowhere, the 49-year-old Jing began slurring his words. Then, all feeling escaped the right side of his foot. Suddenly, he collapsed to the floor.

But thanks to the quick actions of the dentist’s employees, emergency responders and caregivers at Texas Health Fort Worth, Jing survived what turned out to be a major stroke.

“I thought, ‘Oh my, gosh. This could be the end,’ ” Jing said. “I’m just grateful that my employees called 9-1-1. Quick action was key to my survival, and Texas Health Fort Worth was ready for me — with the proper equipment and the necessary people.”

“I thought, ‘Oh my, gosh. This could be the end,’ ” Jing said. “I’m just grateful that my employees called 9-1-1. Quick action was key to my survival, and Texas Health Fort Worth was ready for me — with the proper equipment and the necessary people.” 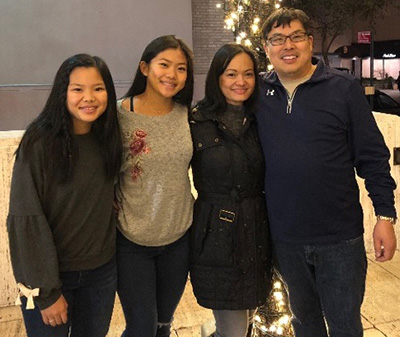 On arrival at Texas Health Fort Worth, Jing’s condition deteriorated, and he was intubated with a breathing tube as a stroke clinician nurse performed a 15-point assessment of his condition. He had no previous history of cardiovascular disease. It was determined that Jing had suffered an ischemic stroke, when a blood clot forms inside a blood vessel and obstructs blood flow to the brain. A drug called tissue plasminogen activator was administered in the ER through a catheter to the area around the clot. Sometimes, the clot can be dissolved in this way to prevent further damage in patients who are treated within four or five hours. Jing, however, would need more intervention, in the form of a thrombectomy.

Texas Health Fort Worth is just one of nine hospitals in North Texas recognized as a comprehensive stroke center. The DNV-GL Comprehensive Stroke Center certification is one of the highest certifications that U.S. hospitals can achieve, and the program is based on rigorous standards outlined by the Brain Attack Coalition and the American Heart Association/American Stroke Association. The designation encompasses the full spectrum of stroke care — diagnosis, treatment, rehabilitation and education. It also highlights a facility’s ability to provide thrombectomy treatment, which helped save Jing’s life.

Matthew Fiesta, M.D., an interventional neuroradiologist on the Texas Health Fort Worth medical staff, performed Jing’s thrombectomy. During the procedure, Fiesta used a catheter to navigate a stent retriever device through an artery in Jing’s groin, all the way to his brain. The device was used to then grab and pull the clot from Jing’s blocked artery. The procedure was successful.

Fiesta said there’s no greater feeling than to see patients like Jing have a positive outcome. But years ago, Fiesta lost his grandfather to a stroke.

“He’s one of the reasons I chose this field of medicine,” he said. “And as we further advance our technology and knowledge of stroke care, I’m hoping we’ll save more lives in the process.”

Every 40 seconds someone in the U.S. has a stroke, and every four minutes someone dies from one, according to the American Stroke Association. For Jing, quick thinking kept him from being a statistic, and allowed him to focus on what’s important.

“He definitely had a quick recovery, because the day after surgery, he wanted to go home and watch ‘Game of Thrones,’” Fiesta said.

Jing is quick to admit that he was guilty of a few things before his stroke.

“I’d eat whatever I wanted. On top of that, my daily activities included work and sleep. The closest I got to sports was sitting on the couch and watching it on TV.”

And three days before his stroke, Jing remembers driving and suddenly losing control of his body. Dizzy, weak and numb along his arms and legs, Jing had to pull over to regain his composure. “A few minutes later I felt normal again, so I told myself it was nothing to worry about.”

Now, every chance he gets, Jing shares lessons learned -- especially with men.

“I can’t stress it enough. Do not ignore abnormalities, and don’t brush it off thinking it’s not a big deal. Trust me – it is.”

Read Jing’s story as it was covered on March 30, 2018 by the Fort Worth Star Telegram.

Call 9-1-1 immediately if you or a loved one is experiencing stroke symptoms. Search for a Texas Health physician or call 214-241-4106 to find a physician on the Texas Health medical staff who can recommend a plan that may help you prevent a future stroke.