After the City of Fort Worth ranked as one of the worst metro areas for well-being in the nation in 2014, Texas Health, city and community leaders set out to change that. Seven years later, leaders at Fort Worth worksites, schools, restaurants, grocery stores, faith-based communities, and local organizations and associations have made permanent lifestyle improvements that benefit more than 200,000 people every day. Through healthier eating, increased activity and stronger social connections, the city is now the largest certified Blue Zones Community in the country.

The team continues to pursue its next goal of helping Fort Worth become the healthiest metropolitan city in the nation. To achieve this, NTHC is working with project partners to execute a strategic plan that will deepen our relationships and engagement with more than 365 participating organizations and over 95,000 individuals.

Snapshot: Despite the Pandemic, Fort Worth Maintains its Well-Being 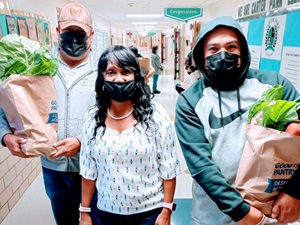 The practices that the City of Fort Worth, Texas Health and other Blue Zone Project participants established in 2014 are proving to be sustainable. Fort Worth maintained its overall Gallup Well-Being Index score in 2021. In fact, residents' health and well-being improved in many areas:

Increasing access to healthier food has been a major focus of project leaders in the last 18 to 24 months. They were instrumental in changing municipal policies to use vacant lots for urban farms and allow residents and pushcart vendors to sell produce.

Additionally, project leaders encouraged local markets to accept federal Supplemental Nutrition Assistance Program (SNAP) benefits so that individuals in need could purchase healthy food and move toward self-sufficiency. This year, program leaders matched SNAP spending on fruits and vegetables through the Double Up Food Bucks program. Launched initially at Cowtown Farmers Market, Double Up expanded to two Foodland stores and Elrod’s Cost Plus Supermarket. Since the inception of Double Up Food Bucks, SNAP users have redeemed almost $4,000 in fresh produce at the farmer's market and over $123,000 at participating grocery stores.