Playground Triage: When to See a Doctor?
A fun day at the playground is a frequent weekend ritual for families, but when Johnny falls or Jane gets a splinter, when do you know to seek medical attention? 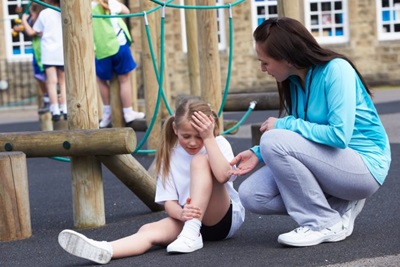 According to the National Program for Playground Safety at the University of Iowa, an average of 218,851 preschool and elementary school children have to go to the ER for injuries that happen at the playground. Of those injuries, 51 percent of the injuries happen on public playground equipment.

According to the U.S. Department of Health and Human Services’ Child Safety Network, falls account for 44 percent of all playground injuries, followed by equipment-related failure (23 percent). Collisions with other children, hazards around the playground, entrapment and other incidents account for the rest of the injuries.

Fractures are the most common injury (36 percent), followed by bruises and scrapes (20 percent), cuts (17 percent), strains and sprains (12 percent), and internal organ injuries (5 percent). And the most common piece of playground equipment to cause injuries? Monkey bars, at 46 percent of all injuries reported between 2001 and 2008.

So what should a parent do when injury strikes?

With the help of three physicians — a pediatrician, an orthopedic surgeon, and an emergency room doctor— we’ll review some of the most common injuries by way of six familiar scenarios.

Scenario one: Your child cuts himself while playing on the playground. How do you know if it requires stitches or just needs some patching up and love from Mom or Dad?

“The thing about cuts is all cuts will heal whether they’re ‘fixed’ or not,” said Glenn Hardesty, D.O., who is an emergency medicine physician on the medical staff at Texas Health Arlington Memorial. “It’s hard to say what lacerations need repair, because there’s not a rule of thumb.”

“If you can see significant bleeding, if it cuts down past skin fat, it probably needs a stitch,” Hardesty said.

If you’re comfortable that the wound is superficial, wash your hands with soap first, and then wash the cut directly with a mild soap and water. Apply pressure to stop the bleeding, and once it has stopped, use an antibiotic ointment and a clean bandage that won’t stick to the cut.

Scenario two: Your kid falls off the jungle gym or monkey bars and bumps his or her head.

“The first step is to see if the child was knocked unconscious. If the kiddo is not knocked unconscious, then it’s safe to observe them at home for about four hours,” said Christopher Dreiling, M.D., who is a pediatrician and physician on the medical staff at Texas Health Dallas. “Take them in if they begin vomiting, complaining of a bad headache, acting altered — or if you just aren’t feeling good about how your child is acting, bring them into the pediatrician.”

“If the child is knocked unconscious for a length of time and/or is altered when he or she wakes up, go straight to the ER,” he added. “But if they’re acting completely normal, you’re probably fine to just observe them and go on.”

Scenario three: Your child falls off the slide but catches himself with his arm, or lands oddly on his ankle. You suspect a broken bone, but also think it could be a sprain.

“If there’s obvious deformity, then we’re looking at a potential fracture,” Dreiling said, adding that a parent should also look for a lot of swelling or bruising.

“If a child falls and there is deformity or swelling use an ER,” said Lindsey Dietrich, M.D., who is an orthopedic surgeon and sports medicine specialist on the medical staff at Texas Health Arlington Memorial.

“Pediatricians are capable of ordering X-rays but frequently their offices are not equipped to splint or cast a broken bone,” she added. “So another option is calling the pediatrician and asking for a fast referral to an orthopedic specialist.”

Dietrich’s important rule? “Young kids and athletes more frequently fracture/break growth plates rather than sprain things so my rule is that if they complain three times — have it checked out,” she said.

Scenario four: Your kiddo runs up to you with a splinter in his or her finger after playing on a wooden surface.

“If it’s parallel to the skin, and superficial, it’s likely to work itself out,” Dreiling said. “If it’s straight down into the skin, it should be looked at, but it’s not a scenario for the ER — you can see your pediatrician.”

Dreiling said parents should watch for infection — the signs will be redness, pus and warmth. “If it starts looking like it’s infected, go see your pediatrician,” he added.

Scenario five: While running, your child trips and falls face first, getting a split lip.

“Very rarely if you have an oral laceration does it need any sort of repair,” said Hardesty. “If it’s just the lip tissue, it will heal. Only if it goes into the facial skin itself would you possibly need a stitch.”

To stop the bleeding, apply pressure with a clean cloth for 10 minutes. Ice might make that sore lip feel better, too.

Scenario six: Your child knocks a tooth out.

“The tooth should be put into a glass of milk, and if you have a relationship with a dentist, call the dentist emergency line, and if not call a pediatrician,” Dreiling said. “A tooth can be reimplanted within a period of time, but it needs to be done pretty quickly.”

If your child already sees a dentist, a tooth-saving storage device (sometimes called Save-a-Tooth or EMT Tooth Saver) may be an option. The kit has a travel case and a fluid solution, and it can usually be purchased from a dentist. It would be a great addition to your home first aid kit.

Need to find the closest ER? Find a Texas Health facility near you. If your child is seriously injured, call 9-1-1.