Backbone of the Community: Larry Hollingsworth
A lumbar fusion re-aligned his slipped vertebrae and relieved pressure on compressed spinal nerves.

Larry Hollingsworth is an outgoing man. Affable, genuine and personable, Larry is the kind of person who enjoys making meaningful connections with others. He puts that talent to work in his demanding business as a Realtor® in Frisco, a career that keeps Larry going up to 80 hours a week, helping clients find their dream homes. The small amount of personal time Larry has is spent working with the youth at his church, teaching Bible study. He is the kind of gentleman that many would say is the backbone of his community.

But crippling pain in Larry’s own back caused all of his involvements to almost come to a halt. Larry had back surgery a few years ago and did well, but then, after a workout, Larry experienced pain in his back that was so intense that he couldn’t stand up straight, couldn’t lean to the left or right, or even bend at the waist.

“I couldn’t get comfortable anywhere,” Larry recalled. “I had nerve pain down my leg, and my foot would go numb.” 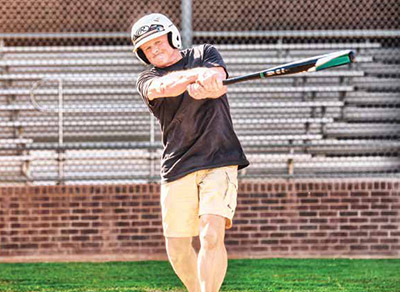 At Texas Health Presbyterian Hospital Dallas, Larry saw Andrew Simpson, M.D., a fellowship-trained spine surgeon on the medical staff who specializes in the treatment of cervical, thoracic and lumbar spine conditions. Dr. Simpson ordered a number of tests, and then explained to Larry that he had developed progressive instability at the site of his prior surgery and that one of his lumbar vertebrae had shifted forward on another, called spondylolisthesis, which resulted in severe compression of his spinal nerves, causing him debilitating back and leg pain. His compression was so severe, in fact, that he was developing significant neurologic weakness. Dr. Simpson explained that not only was this a complete occlusion – it was also something he could fix.

Dr. Simpson performed a lumbar fusion at Texas Health Dallas using an innovative technique called transforaminal lumbar interbody fusion, or TLIF, on Larry. The procedure is designed to re-align the slipped vertebrae and create solid bone between them in order to fix his instability and make room for his spinal nerves that were severely compressed. The previous spinal instrumentation that had been placed and was now scarred to his nerves was removed, new hardware was used on Larry’s spine to help stabilize his back and enhance the fusion rate of bone. Pedicle screws and rods were attached to the back of the vertebra and an interbody fusion device was inserted into the disc space from one side of the spine.

The surgery was performed all through Larry’s prior back incision, by making room for his nerves and accessing Larry’s ruptured disc, removing a portion of it and putting a surgical device in place to hold the vertebrae up. He filled that with bone marrow from Larry’s own hip bone in an attempt to make it heal faster. The goal, as Dr. Simpson explained to Larry, was for the bones in Larry’s back to fuse.

Previously, Larry had undergone other surgeries on his back as a result of injury and a lifetime playing sports such as football and baseball. Dr. Simpson carefully navigated scar tissue in Larry’s back, cutting through it to perform the surgery rather than creating new scar tissue. Though it took extra time, the surgery was performed in the best way to support Larry’s quick recovery.

“Mr. Hollingsworth had a prior surgery where a decompression of the spinal nerves was performed as well as placement of an interspinous spacer device. He had developed instability at that level with slippage of the vertebrae and recurrence of his nerve compression,” said Dr. Simpson. “Revising prior surgery is always more of a surgical challenge, because the presence of scar tissue from the prior surgery alters the anatomy. In his case, the prior implant was scarred to the nerves, requiring some extra attention to remove it and safely relieve the pressure on his nerves. We were able to achieve an excellent decompression of his nerves, as well as restore his spinal alignment.”

“I found the staff to be wonderful and very attentive to my needs,” he recalls. “I felt that I received a very high level of care.”

Recovering from his surgery at Texas Health Dallas, Larry felt that he was in good hands. “I found the staff to be wonderful and very attentive to my needs,” he recalls. “I felt that I received a very high level of care.”

Much of Larry’s successful recovery has been from his own great attitude and will to return to his active lifestyle. A week after surgery, Larry was back to his real estate duties, working half-days in his office, and was working full-time two weeks after his procedure. He also returned to riding his beloved motorcycle and is making plans to play adult softball.

Most importantly, he has been able to resume his Bible study teaching duties, helping fourth-graders become good upstanding citizens. Larry teaches a strong spiritual relationship that allows his students to stand tall. And he looks forward to all of them becoming backbones of their community, as well, now that his own back allows him to lead his life the way he feels he is led.

Start getting back to life today. Call 214-612-7033 or find a physician on the Texas Health medical staff.