Area grandmother receives gift of life
More than 101,000 people in the U.S. are on the waiting list for a kidney transplant, according to the National Kidney Foundation.

There was a time last year when area grandmother Barbara Midkiff, 62, thought she would not survive her polycystic kidney disease, which is a genetic disease that usually presents when a person is in their 40s or 50s.

Midkiff had an extremely rare match type and many people she knew were tested, no one was a match. One August afternoon, she was lying on her couch, looking at a photo her daughter had just texted her of her 5-year-old grandson when her phone started ringing. It was her transplant coordinator letting her know about a 5-year-old boy in the Intensive Care Unit. And he was a match.

The next few moments were a blur for Midkiff. She hit her knees and prayed for the boy and his family.

“It took my breath away,” Midkiff said. “I prayed for him like he was mine. I prayed for his family, even though I didn’t know anything about them. I prayed he would live. I wanted a kidney, but not like this.” 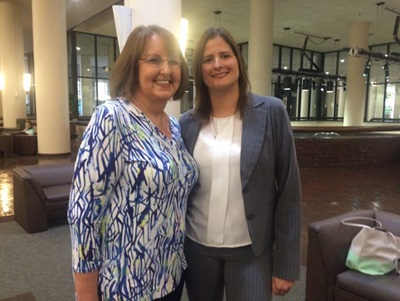 Shortly after that call, the child, named Lukas, died from a brain aneurism and his mother, Lola Gomez of Arlington, decided to donate his kidney among other organs.

“I still can’t believe it,” Midkiff said. “Out of this tragedy, this loss … I’m just so grateful.”

Journey to a transplant

More than 101,000 people in the U.S. are on the waiting list for a kidney transplant, according to the National Kidney Foundation. Less than 17,000 people receive one each year. In Midkiff’s case, there is no cure for polycystic kidney disease. Barbara is the fourth child in her family and all three of her siblings had the disease.

As she watched her siblings go through life battling complications associated with the disease, she tried to prepare for what she thought was the eventual truth: she would also get it.

In January 2015, that truth became all too real.

“I thought I was going to be fine at first,” she said. “My daughter really wanted to be a living donor, but when we found out she wasn’t a match, she was crushed. And as more and more people were tested and weren’t a match, I began to lose faith.”

In the next few months, Midkiff learned that six out of every 100 people would be a match for her. The bright side: the U.S. Department of Health & Human Services announced a rule change last summer, saying that if a patient was difficult to match and a potential match became available, then they can move to the top of the transplant waiting list.

“Even with being at the top of the list, as the months dragged on, I just became defeated,” Midkiff said. “And then that call came.”

The kidney transplant program at Texas Health Fort Worth cares for patients with end-stage renal disease by evaluating whether a kidney transplant is safe and beneficial, providing guidance on donor options and placing the patient on a waiting list if qualified. Once a donor kidney is available, the patient is quickly notified to prepare for surgery.

Connecting with the family

Midkiff, a mother of four and grandmother of seven — with two more on the way — said she has an enormous amount of respect and appreciation for what Gomez did.

“I wrote a letter to my donor family as soon as I got home,” she said. “I didn’t know who they were, but I was told I could write a letter and they could decide if they wanted to answer back. I hoped they would.”

After months of letters and texting, the two met in person in February.

“I can’t describe the feeling of meeting her,” Midkiff said of Gomez. “While we texted, I found out that it was she who first asked about donating Lukas’ organs. It blew me away to think that in the midst of her grief and sorrow, she thought to ask about donating. How much longer would I have waited on that list? I just hope she knows how much her decision means to me and I pray it gives her some small amount of comfort.