Patient recovers from COVID-19 with support from faith community
It was a tightness in his chest that just wouldn’t go away – and it was the only sign of a journey one man did not anticipate he would take.

It was a tightness in his chest that just wouldn’t go away – and it was the only sign of a journey one man did not anticipate he would take.

Andy Fambrough, a 50-year-old dad, husband, volunteer worship leader and Fort Worth resident, never expected he would be so personally affected by what may be the largest event in 100 years of human history. But here he was, in a hospital bed at Texas Health Alliance, with a cadre of physicians and nurses that he now calls family.

“I felt I had a team of upbeat people around me. And also my faith community – I had tons of people praying for me,” Andy said. “But no one from the outside world could come in.”

He had been monitoring his health closely. Diagnosed with rheumatoid arthritis about 25 years ago, Andy is an active person who takes care of his body and--other than the arthritis--has no other pre-existing conditions. Sinus drainage and a nagging cough eventually sent him to an emergency room, where he received X-rays of his chest. Told in that ER that it was viral bronchitis, Andy took the prescribed medicine but his condition continued to worsen.

Then, on March 24, he had a cough that just wouldn’t stop. Unable to catch his breath, Andy went directly from work to Texas Health Alliance, where care teams would help him through the scariest journey of his life. 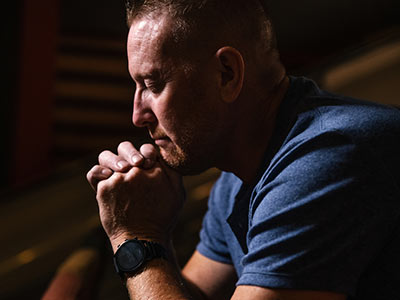 “They took me straight back to a room in the ER. They did a chest X-ray and a CT scan, and tested for the virus with a swab,” Andy remembered. “They said, ‘You have pneumonia in both lungs and in your upper respiratory area your symptoms are consistent with COVID-19.’”

Andy had heard of “COVID-19,” the term for a virus officially called SARS-CoV-2. He had read about it in the news, but wasn’t thinking that he would be among those infected: He didn’t know of anyone close to him who had recently traveled overseas. “It was a sense of embarrassment and then of course fear, me with arthritis and a compromised immune system. ‘Am I going to die? Am I going to be another statistic?’” he remembered asking himself.

“Every day, I tell my patient that we’re going to fight this together,” Dr. Islam said, recalling her words to her patient.

Andy’s nine-day stay at Texas Health Alliance helped him beat the virus – but it wasn’t without its harrowing moments. “I was in the hospital, literally watching every second on the clock on the wall in the room, thinking ‘I’m not strong enough to make it through this.’” Doctors explained to him that they were convinced he had coronavirus in addition to pneumonia. Andy’s oxygen levels were closely monitored, and he fortunately did not need the help of a ventilator to breathe.

What he did need, though, was the teamwork that Andy says buoyed him. Unable to receive visits from his friends and family during his illness, he turned to the physicians and nursing staff, who treated him like family, Andy said. They, in turn, stayed closely coordinated to help best manage his care.

“All of the doctors were super upbeat about my treatment plan, and told me I was going to be fine,” Andy said. “There were so many people on that team coming in and out, checking on me. One motion [from me] and they were at my beck and call! I felt I had a team of upbeat people around me.”

The nursing house supervisor would call Andy’s wife daily, giving her updates on her husband’s condition, since no visitors were allowed in to see Andy. “It’s the first time I’ve been in the hospital, sick, and not knowing what’s next for my life, and this team became my family for the next nine days,” Andy said of his care team. “I felt like they were all on the same page about how they were ‘handling Andy’ today.”

Dr. Islam points to teamwork when describing how the challenges of COVID-19, and Andy’s specific condition, were met. “We got the infectious disease doctor on board from day one,” she said. Other members of the team included the primary attending, primary care physicians, day and night nurses, intensivist specialists, nurse managers, and a clinical nurse leader who communicated with Andy and his family to answer any questions about his care.

The MyChart app from Texas Health was also useful for Andy, as he was able to review results of tests, billing and more, all from the convenience of his cell phone. “Andy got his results himself the previous night on his MyChart, so he was checking himself very carefully,” Dr. Islam said. “He knew his result before we were able to tell him!”

Andy’s illness necessitated a nine-day stay at Texas Health Alliance. After taking it easy for another three days at home, Andy was able to walk three miles and, soon after, return to work.

“He has been a great patient and he has been very supportive and it was easy to take care of him. I had a great experience taking care of him. There are so many unique things I have learned from every single patient encounter,” said Dr. Islam, who has taken care of at least nine patients who were diagnosed with COVID-19.

Andy summed up his feelings about his hospital experience and recovery by saying, “God put me in the right place at the right time with the right doctors and nurses to be able to share my story and say that God gets the glory because of this healing.”