Leighton Jane Hudson was supposed to make her entrance into the world in August of 2017. But at 17 gestational weeks, an ultrasound revealed that Kari and Trent Hudson’s baby girl had two-vessel cord disease and they began seeing maternal fetal medicine physician Monisha Gidvani, M.D., on the medical staff at Texas Health Presbyterian Hospital Allen. Typically, a baby’s umbilical cord has three blood vessels: two arteries and one vein. Babies who have just one artery and vein may be at an increased risk for birth defects such as heart and/or kidney problems.

Kari and baby Leighton were closely monitored from then on and when the mom-to-be began making bi-weekly visits to Dr. Gidvani at around 28 weeks, it was discovered that the fluid surrounding the baby was incredibly low. Kari was sent straight to Texas Health Allen for observation, fluids, a steroid injection to help with Leighton’s lung development and magnesium to try to stave off pre-term contractions. While in the hospital, it was also determined that Leighton’s heart rate was dropping. Kari’s obstetrician, Sherri Meredith, M.D., of Modern OB/GYN Allen and the Texas Health Allen medical staff, made the call to admit Kari until the delivery. 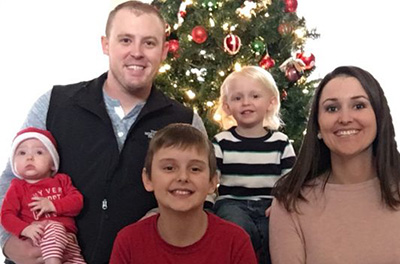 Two days later, on June 25, 2017 Leighton’s heart rate again dropped and she was delivered via cesarean section. Weighing in at just 3 pounds and 4 ounces, baby Leighton was in need of some special care. In the Level III Neonatal Intensive Care Unit at Texas Health Allen, she was put on CPAP for breathing and required a feeding tube. Although another of the Hudson children had spent a week in the NICU when delivered several years earlier, Kari and Trent were unprepared for what would become a 62-day stay for Leighton. There were some especially tough times when the couple witnessed drops in Leighton’s oxygen level and heart rate, but they always found compassionate support in the hospital’s NICU nursing staff and the prayers of family members to help keep them sane.

Life in the NICU

“Our first nurse was Katie,” remembered Kari. “She helped us through all the tears, medical terms and general NICU life. She answered every question — some several times. I didn’t know until Leighton graduated just how touch-and-go our first two weeks were. We battled constant beeping monitors with low oxygen and heart rate. It was the scariest time of my life, but our nurses and doctors made us feel incredibly at ease.” 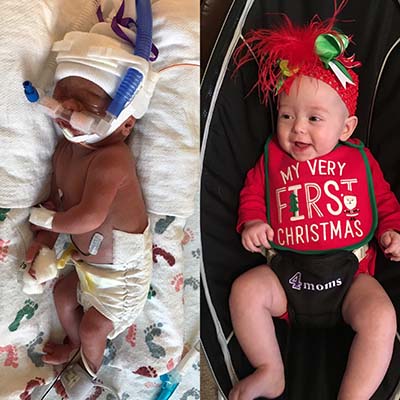 Kari and Trent kept a crazy schedule of switching out visits and touch times with their new daughter as they juggled home and NICU life. As they became more and more comfortable with the nursing staff at the hospital, the Hudsons found they could rely on the staff for updates when they were away and for additional touch times for baby Leighton. Thanks to the hospital’s internet-based Angel Eye Cameras, the couple could receive notes of Leighton’s accomplishments from afar.

“The Angel Cam was our way to watch her when we couldn’t be there,” Kari said. “It was also a way for family far away to watch her. I could wake up at 3 a.m. and see my sweet girl. When Leighton finished her first bottle, it was night nurse Amanda who made a sign on the Angel Cam to show us. It said, ‘Guess who finished her first bottle… ME.’ Waking up to that was amazing!”

The nurses also made signs for Leighton’s isolette and they held the newborn when neither parent was available. Kari admitted that the NICU nurses were the only people she trusted with Leighton when neither mom nor dad could be there, and she credits them with helping the family truly prepare for life after the NICU.

“The nurses taught us EVERYTHING,” Kari said. “They taught us about all of the machines, alarms, medications, touch times and Angel cams. They encouraged me to pump and always praised me for any amount I produced. They taught us about mixing NeoSure to increase calories, bathing Leighton and how to keep her healthy after the NICU. They taught us that we would be okay after leaving (this was HUGE) and that she would be healthy before she went home.

I think both day nurses Susan and Katie told us over and over, ‘We won’t send her home with monitors still beeping.’ Gail, the occupational therapist, taught us massages and movements to help build Leighton’s muscles. She also monitored all of Leighton’s feeding and swallowing progress. Every person that cared for Leighton made sure we were well educated and all questions were answered. You know your baby is loved when the nurses cry when you leave.”